Considering the death records of Karnataka from 2015 – 2019, more than 56,038 persons have lost their lives by committing suicide. This tracks down to 31 deaths by suicide daily and more deeply taking the statistics, it comes down to 1 death in every 46 minutes.

The National Crime Records Bureau has conducted a study over a period of 5 years from 2015 – 2019 with the report titled “Accidental Deaths and Suicides in India”. The report presents the figurative estimation, stating that on an average 1.33 lakh commit suicide in India.

Decline in suicide cases in Karnataka

Around 9% deaths were reported by suicide in 2017, and fell to 8.6 % in 2018. Though, Bengaluru constantly stands in top 3 cities with the highest record. Considering 2019, Bengaluru alone recorded 2,081 cases, compared to 2,461 cases in Chennai and 2,423 cases in Delhi. Mumbai takes a little back seat with 1,229. From the 56,038 deaths recorded in last 5 years, 75% were male and 24.9 % female cases were recorded. The causes of suicide vary from illness, to family problems, bankruptcy, relationship issues, exam failure, unemployment and career issues.

Covid-19 is not just taking lives of the people by the infection, but a part of it is also hitting the psychology of the people who may not be virus-infected. With a range from reasons from alcohol withdrawal in the initial weeks, fear of being infected, feeling loneliness to starvation, job loss and financial crisis.

Recording the data from just March 16 to May 2, about 338 deaths were reported due to the imposed lockdown to prevent the Coronavirus transmission. The age group from 16-25 has been the most affected due to the lockdown.

September 10 is observed as World Suicide Prevention Day. The major goal of the day is to spread more awareness about the thoughts, feelings and emotions associated to distress and thereby working on preventing people from taking the extreme step. 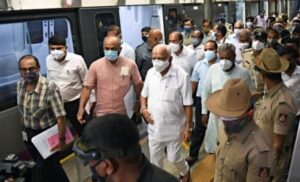